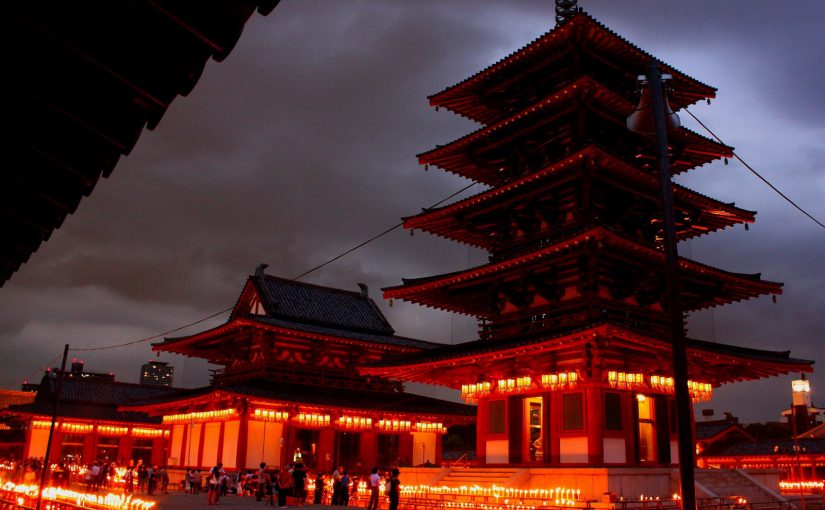 Osaka is popular for shopping districts, comedy and drinking establishments. However, if you feel like taking a break from the crowds, and experiencing a more traditional side of Japan, then why not visit a temple or shrine. Let me introduce you some of them.

This Buddhist temple complex in the middle of Tennoji is regarded as the oldest official temple in Japan. Prince Shotoku, credited as the man who brought Buddhism to Japan, had the temple constructed in the late 500s by a group of Korean carpenters. Many highlights are awaiting you such as the Taishi-den where Prince Shotuku is enshrined, the Goku-raku-jodo-no-niwa Japanese garden, the five-storey pagoda which is open to the public and the Ishii-no-torii stone gate which is an unusual structure for a shrine. The ancient contruction of the temple makes it a popular sightseeing spot.

Osaka’s Sumiyoshi Taisha is one of Japan’s oldest shrines. What makes it so special is that it displays a unique style of shrine architecture, called Sumiyoshi-zukuri, that is free of influence from the Asian mainland. Only two other shrine architecture styles are also considered purely Japanese: Shinmei-zukuri and Taisha-zukuri. This shrine is the main and most famous of over two thousand Sumiyoshi shrines found across Japan. Sumiyoshi shrines enshrine the kami (Shinto gods) who protect travelers, fishermen and sailors at sea. The shrines are therefore usually found close to harbors.

Osaka Tenmangu, is the most famous of all the tenjin/tenmangu shrines throughout Japan. Tenjin or tenmangu shrines refer to those shrines dedicated to Sugawara Michizane, one of the greatest scholars, poets and politicians of Japan’s Heian Period. It is a large shrine in the middle of a residential and business district. What’s even more surprising is how quiet it is. A place popular with locals, it’s unusual to see tourists at Osaka Tenmangu. You can experience the rareity that is finding yourself alone, wandering the pathways, or standing at the alters. This is an enormous contrast in comparison to the manically popular temples and shrines of Kyoto.

Tenmangu is especially famous for its festival the Tenjin Matsuri, which is held annually on July 24 and 25 and is ranked as one of Japan’s top three festivals besides Kyoto’s Gion Matsuri and Tokyo’s Kanda Matsuri.

On your next journey to Osaka don’t hesitate to visit these astonishing shrines and temples.